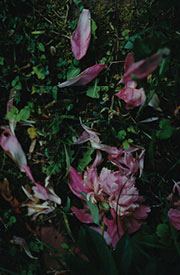 Blumau is a hidden place in my life. I invert natural objects and flora from their delicate scale to expansive, sometimes menacing and mysterious landscapes – giving the viewer the sensation that one can be lost inside the image, engulfed by the scope of its details and sensations.
more

This series expands on concept of Nachtgärten, placing a human subject (Dr. Zet) and his objects and possession inside of and in contrast to, the natural surroundings and their implied sensuousness
more

The absence of any actual bridge emphasizes the detail of the surrounding life – filling the images with a robustness, an otherworldly vibrancy that borders on the surreal.
more 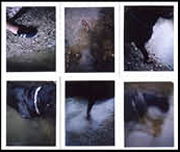 With my polaroid series, I work with a variety of subjects – both urban and natural, individuals and objects – I strive to interpret subtle shifts in perspective, relational documentation, and how physical landscapes can transform into emotional ones, and vice versa. The arrangement of multiple images of a certain subject creates a narrative – my vision of how a particular moment feels as it passes, and how time can be embodied via stillness.
more

Loosely based on an image from Lewis Carroll’s Alice in Wonderland, I teamed with Michael Strohmann on this installation of 18 cardboard viewboxes that contained Slides
more

The Installation: „Die Göttin der Unsterblichkeit“.
A Black Citroen DS. As a man sits in the driver’s seat,
the point of views extends through the rear view mirror
into various incarnations of the past. more

The mystery of
bombing a car

As part of the Toxic Dream installation series The Mystery of the Enchanted Cars, this installation featured a car with a red button that activated the inflation of two giant balloons. Visitors sat in the car, experiencing the growing claustrophobia, and mounting adrenaline as the pressure in the car grew towards the balloons’ explosion
more

When the sky digs itself out of the earth, because it doesn‘t have enough room, spaces of joy and fear open up. For me the Wolkenspiel cycle is a filmic, playful, interactive exploration of space that is never what it is supposed to be.
more

In this video, I visited the home of Conny & Bert from the performance group Las Venus. Soundtracked by their music, I documented and interacted with their space and belongings
more

Soundtracked by the music of Las Venus, the object of gaze in this video is a blooming Magnolia bush in the evening – its beauty, mystery and lingering sense of drowsy melancholy
more

This video is a playful experiment with sound and visual editing with Ivan the dog as the strange subject.
more 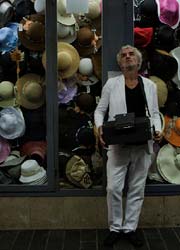 In this Performance Momo strolls thru Belgrad and shares stories of his live with the viewer – in exchange with a personal story from this viewer. Like this Momo becomes a walking Archive of Histories related to the people of Belgrad.
more

The photos, interviews and atmo-sounds for the “The Belgrad Loop” where all recorded at the same time. Fragments of sounds, interviews and not hoped for moments close this never ending and never beginning moebius loop. Out of a seemingly random conglomeration of “Sound-Images” a controversial, poetic and intense portrait of Belgrad emerges.more

mostar … dream of my reality

The film joins Momir who is visiting his hometown for the first time after 18 years. The encounter with old friends sets him back into a time that he chose not to experience. A stroll through the town triggers memories of a city that – due to the crack in its heart – will never be the same. This series of short poetical stories form a joyful, gloomy and bizarre portrait of Mostar.

the bad and the ugly

A videowalk into the mind of the city

By accepting an invitation into the dark forest Dante wrote of centuries ago, I navigated the twisted circles of hell that awaited in Berlin’s seedy Club Inferno – a labyrinthan installation in Wedding by SIGNA.
more

Based on Kafka’s Der Prozess, the audience is now the accused – they must build their cases, cruise through the wide grey halls, and endure the mounting paranoia of this systemized harvestation of guilt.
more

Absorbed into the sweat and smoke of SIGNA’s interpretation of hell as a nightclub full of damned women, I was enrolled in an unusual game of stakes and nerve. The meaning of victory, however, was not to be assumed when at the mercy of Hades and Persephone’s desires.
more

Set in a crumbling villa in Copenhagen, SIGNA’s scathing and visceral interpretation of Pier Paolo Pasolini’s film Salò allowed me to be fully immersed in the meniacal world of libertanage twenty four hours a day, weaving in and out of the hierarchy of victims and their masters.
more

The Unland-Deuthens are celebrating – the transition into a new era – the revolution of mankind that ends in a bloodbath. “Germania Song”: a performance installation by SIGNA.
more

Situated among three performers playing controversial scientists, my role was documenting the telepathic abilities and side-effects of test subjects gifted with telepathic communal abilities, and the content of this unique fictional community within a secret factory.
more

“I spent six days and six nights in the ‘Dorine Chaikin Institute’ – a fictive asylum you could commit yourself to and thus become an actor in this performance installation by SIGNA. As part of the performance I visualised small stories reflecting my various moods.”
more

In an abandoned house in Salzburg, this performance led us through the catastrophic end of a dismal family story and its haunting remains. The images retrace the footsteps of the house’s secrets, the family’s cycle of violence and victimhood, and their entrenchment in the underworld of trafficked girls.
more

Rubytown was a functioning border settlement built by SIGNA, and populated by performers playing the descendants and cult worshippers of Martha Rubin – a fictional oracle, who has returned to the living. The dynamics and mysteries of the townspeople are recorded and preserved by the images and videos that testify to the installation’s expansive effect.
more

Audience was directed through 43 rooms of a fictitious universe overseen by the austere Prince of Trauenstein, leader of a spiritual movement intended to free the world from its miseries. The house was interwoven by magnetic tapes that constantly absorbed the symbolic miseries of the world, only to be destroyed.
more

toxic dreams was founded 1997 by Kornelia Kilga and Yosi Wanunu. „Since 1997 we have been putting on shows that deal with the not knowing… shows that busy themselves with the slippery nature of reality… shows that refuse coherent, narrative, through lines… shows that celebrate the ambiguity of everyday’s life… shows that became more and more fragmented as time went by…“ toxicDreams
more

“Carnival of Souls” a performance by Fuckhead. Oktober 2009
more

Playing with the notion of physical façade and humour, this series of photographs follows a project by Johannes Langeder in which the exterior of the Ferrari was built onto a bicycle as it travels through the city of Linz.
more

Video documentation of two live performances by The Midnight Specials at Rother Krebs in Linz.
more

This footage documents an evening concert in a museum by lasVenus. Original hypnotic lullabies played on the accordian and theremin drifted over several beds, where audience could sleep and listen.
more